Today is New Years Eve and with the last whispers of Christmas being put away I am posting just one more Christmas 'Making Do'.

About 8 years ago I found these huge wreaths for $16 at Winners on their after Thanksgiving sale.  Stored them in my garage and for the next years loaned them to my church to place on their beautiful windows for the Thanksgiving décor.  We are no longer at that church and with a 46 inch diameter they were too big for my front door so I found a gorgeous spot in my kitchen!


When Thanksgiving was over I loved it so much that I could not take it down.  The following year I decided to turn one into a Christmas wreath and make it legit.  Rather than run out and find Christmas accents I chose to keep in the heart of  'making do' and pulled out my green and red paint spray cans.  I'm quite pleased with how it has turned out.  A Win from Winners! 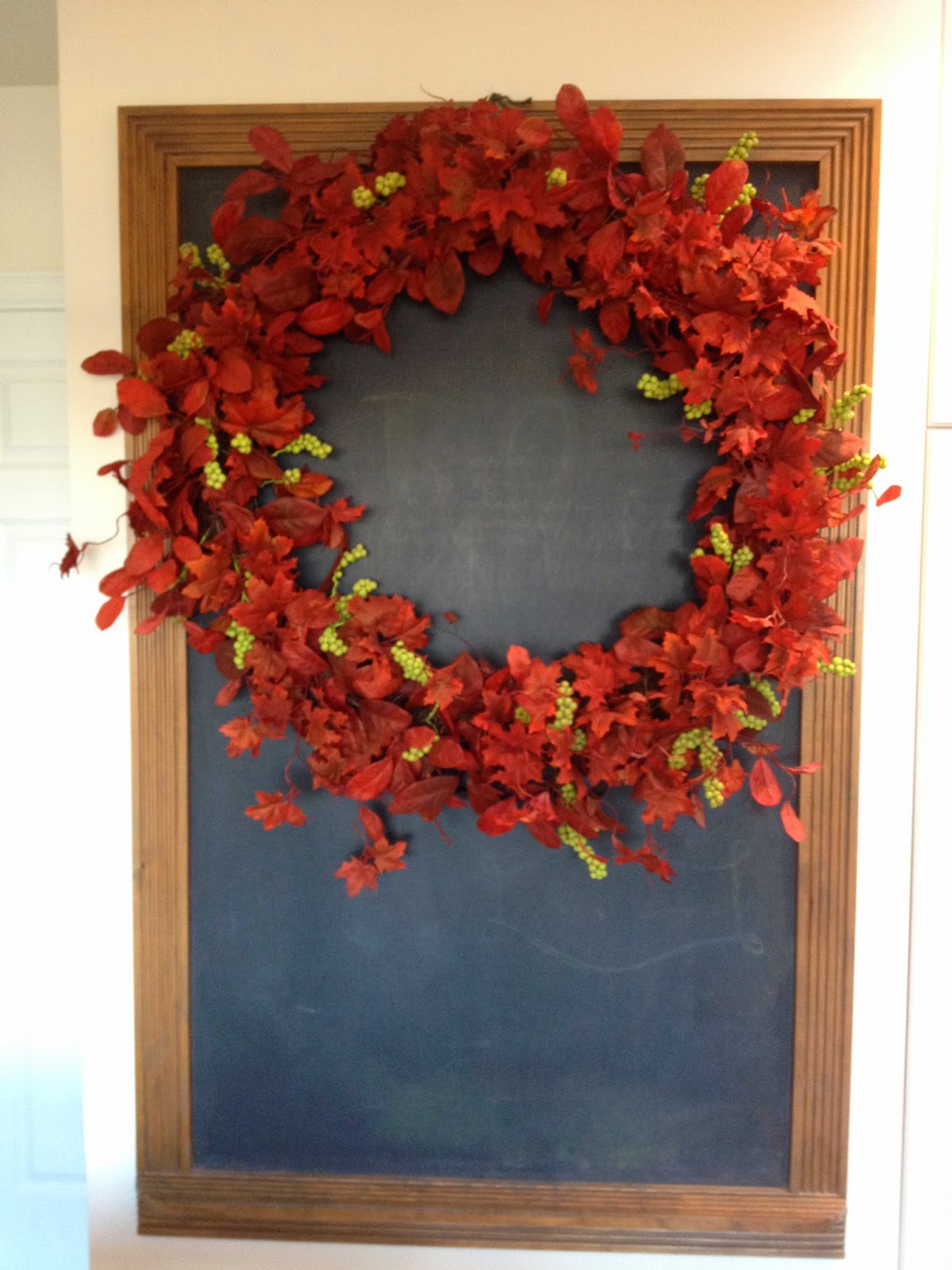 And now with Christmas tucked away.  It's time to breathe deep and look forward.  Happy New Year everybody.
Posted by Constance at 10:43 1 comment:

Email ThisBlogThis!Share to TwitterShare to FacebookShare to Pinterest
Labels: Making Do

Posted by Constance at 14:01 No comments:

Today I am celebrating one of my personality gifts.  It's my ability to 'make do' with what I have.  Actually, I have always had the ability and temperament to make the most of my surroundings and circumstances.  So this is what hits my good feelings today. 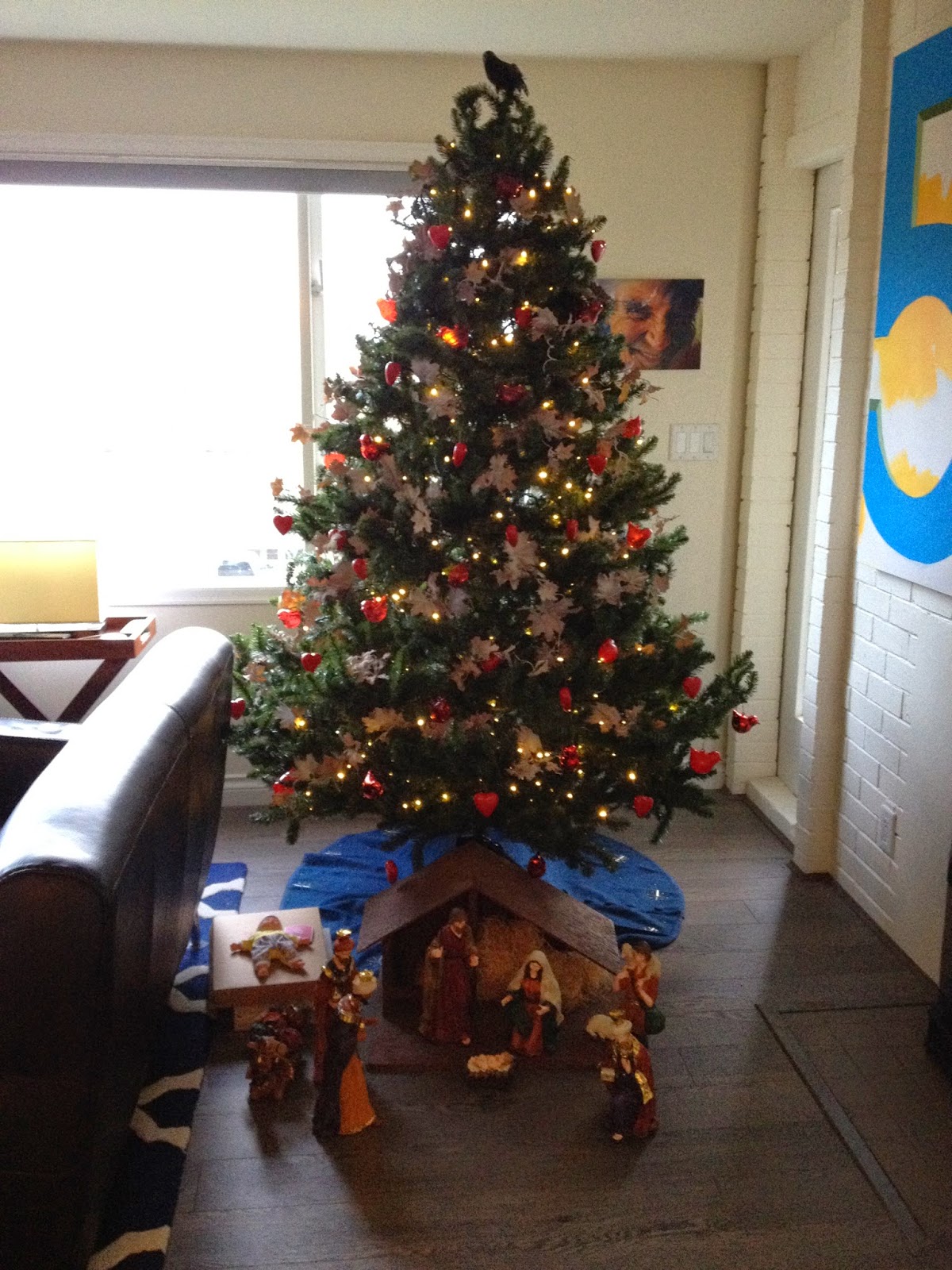 I love my Christmas tree and have often just had white lights and the bird at the top.  Keeping it simple and beautiful because it is a full (artificial) tree.  We've always had an artificial tree because when we were newly weds and had our little family living in Los Angeles for the first 15 years real trees were waaaayyyyy beyond our budget.  We both had arrived as 'purists' from Beautiful British Columbia Canada, but learned very quickly that supply and demand is quite different in LA and the prices there were beyond our reach.  One of those first years we found a very full and very artificial looking tree at a Goodwill store.  I believe I found it after Christmas so it was an amazing deal.  And so our journey with 'making do' and artificial trees began.  My kids have never had a real live Christmas tree.  They haven't missed too much except for the wonderful smell and learning what it means to water the tree and have the needles drop off after Christmas and then trying to dispose of it.  I've not really missed the real tree.  But in the heart of 'making do' I wanted to do something new on my tree this year.  I scrounged around my boxes and found some old hearts and a few little red glass birds for starters.  I was limited in what I had and saw that my tree looked a bit lack luster.  If you go minimal, like I did with the lights, then stay pure.  It makes a great statement but if you add something, go all the way girl!  So... my making do strategy was to retrieve my thanksgiving wreath with its grapevine leaves and add those.  They have a brown texture and add a new sort of nature feel.  I'm liking the way this has turned out.  And so is my budget. 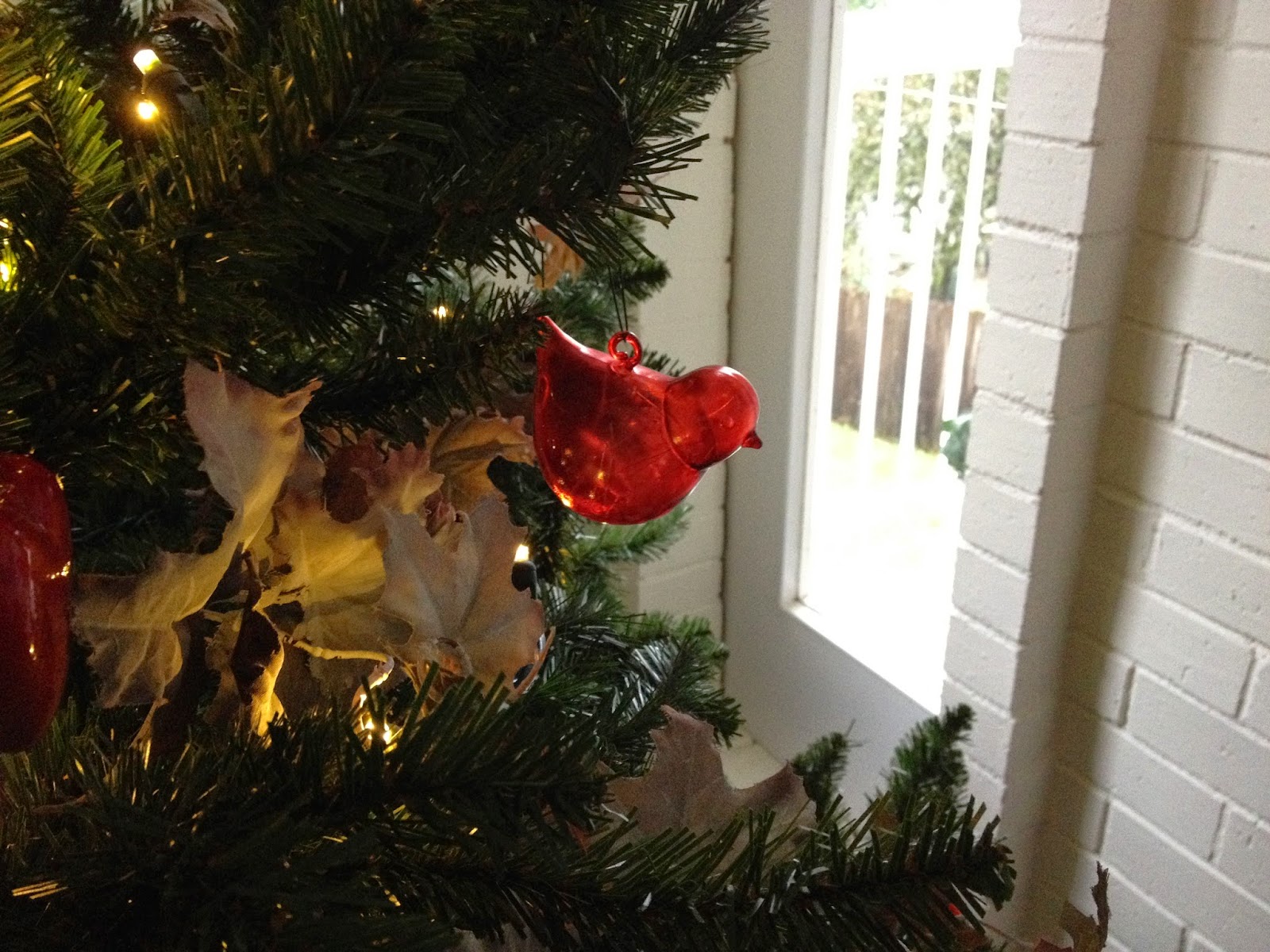 Posted by Constance at 17:14 No comments:

Email ThisBlogThis!Share to TwitterShare to FacebookShare to Pinterest
Labels: Making Do

Sometimes We Need Help to Cry 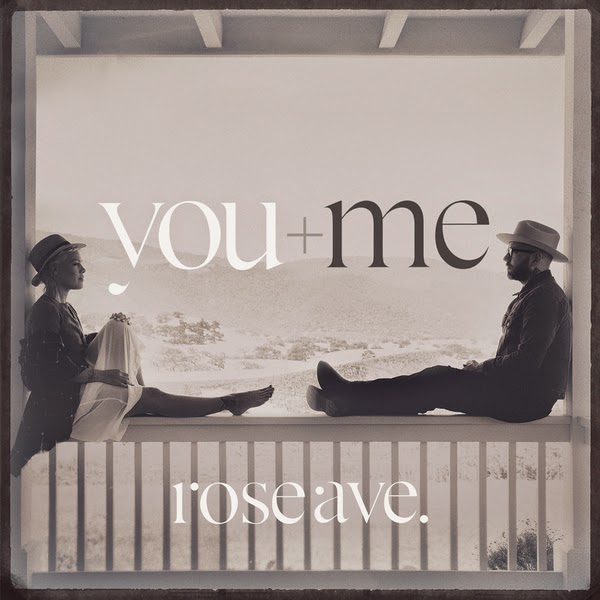 My husband emailed me this link today.   An article where Pink and Dallas Green talk about their collaboration 'You + Me'.  (letting it play on YouTube as I write.)  I've always had good respect for Pink.  She has the real vocal, also is gutsy and her own person from what I can see from way over here.

Pink refers to Lauryn Hill (love LH's vocals so much. Does she really have six kids and what? Tax evasion?) Pink has such positive affirmations for others.  LOVE this on any given day.  But today as I went back to look up the Sister Act references Pink makes, I find myself moved to tears as music can do.  Sometimes we need help to cry.  A settling and soothing of pain.  Hope in healing.  Tears that let you know how far you've come.

When songs say so much more than one could.  I'm grateful, yes, joyful this Christmas for all the soul cleansing reasons.  We are a complicated people and although the happenstance to the hurt and pain and the sin that causes it is not simple. The solution is also not simple, to come as a baby and wait patiently for a full and perfect answer.  I celebrate His patience and perfect plan.  When our hearts have been crushed, finding a reason to take the risk to let it unfold again is the miracle worth embracing.

I love this season.  The sound of redemption.

Posted by Constance at 17:01 No comments:

The best Christmas Shopping so far

Every year since 1991 I have packed two Samaritan's Purse Operation Christmas Child boxes for two little boys ages 5-9 for children around the world affected by war, poverty, famine, or natural disaster in a developing country.  I've always loved doing this, to head off to the store with my boxes to see how much I can cram into the little box.  This year, I was not around organizations that brought out the identifiable boxes at the beginning of November and it had not crossed my mind til it was too late to drop the boxes off locally.  I was super bummed but somehow stumbled on the Samaritan's purse site that you can pack your boxes on-line and still have time.  Yee Haw!  Just finished!  And I still am on a great running streak!  So thrilled!  If you have never done this, check it out.  This truly is the meaning of Christmas.  Now I'm off to a good start and the rest of my gifts are just icing on the cake as far as I'm concerned.  I'm so thrilled to be able to give!!!

Posted by Constance at 20:07 No comments:

Praying with my 93 year-old father

A visit that included rich conversation with my 93 year-old father yesterday ended with him reciting a small part of the Lord's prayer where, having known these verses for memory for at least 85 years, he switched up a line.

Thy will be done on earth as it is in heaven

Give us this day our daily bread

And forgive us our debts as we forgive our debtors

And help us to forgive as You forgive

I thought it a wonderful switch, valuable words that expressed a sincerity and a dear heart prayer.

It is the season where we long for peace on earth.  I think part of the solution is found in my father's prayer.
Posted by Constance at 07:29 No comments:

Last night my SwHt and I took transit to see Camille Claudel, 1915 at the Vancity Theatre, depicting the years this gifted sculptor was admitted to an insane asylum by her family.  A very slow moving story focusing only on her time in the asylum, and sadly, did not share her fantastic work, being images of those statues and drawings which remain.  She apparently destroyed much of it herself.  Nor did it prep you to understand (if you do not follow artists) that the Rodin she refers to is also the famous sculptor Auguste Rodin known for many works including The Thinker.


Love Juliette Binoche ever since she showed up on the big screen here in 2000, 'Chocolat'.


On our way to the theatre, at the corner of Richards & Davie St. I saw this!  Hello!  A public washroom a la Europe possibly?  I peeked at the door looking how to get in but we were in a hurry so did not have time to stick my head in to snap a shot. But, should you also be curious, I thought I'd include this PSA on the latest on Street Furniture Vancouver (Apparently 'Street Furniture' also includes benches, bus shelters, bikes racks, litter cans, etc.)

In 2003 the city of Vancouver entered into a 20-year contract with CBS and a French company called JC Decaux, which manufactures toilets in France.  The installation of these fully automated, self cleaning public washrooms began in 2007, which was to include 8 toilets at 8 separate locations.
Located at:
1.  Main Street at Terminal Avenue, on the edge of downtown.
2.  Davie and Richards Streets (pix above)
3.  Nelson just off of Granville Street
4.  Pigeon Park on East Hastings
5.  Davie Street at Bute Street
6.  The Granville mall
Not sure where the other two are.
At first I thought I could not get in because I could not find the place to pay but apparently due to it being a basic human need the City of Vancouver has a bylaw stating that all public toilets must be free of any cost.*
So... we were in a rush and I could not inspect.  I must be exceptionally desperate to use a public washroom myself.  I'm sure I'm not alone.  But in the case, you have someone with you who does and you are strolling the streets of downtown Vancouver.  This is your enlightenment.
*for more information on this item of Street furniture and to credit my knowledge of some of the other locations check out Hailey Whitt's essay from Aug 4, 2011 -- Automated Public Toilets Review.  on the site Artists Walking Home
﻿
Posted by Constance at 11:23 No comments: